You are at:Home»Articles & News»The benefits of Mnova on the web

Perhaps you have seen recent posts hinting at the forthcoming availability of Mnova on the web. If you are a Mnova user who has been working with the desktop version of the software for years, perhaps you thought to yourself: “that looks interesting, but I have Mnova desktop, so it is not relevant to me”. If so, read on.

As a desktop user of Mnova, you might not see the benefits of having a web version of the software. You might only see a downside – you might be worried it might be slower and less responsive, for example. Or Perhaps it might have a reduced features set, or not support as many data types.  Perhaps finding and opening files will be harder? What compromises would you be making?

The answer these concerns is not to worry! Mnova Web is fast – the difference in performance is minimal, even when working from home. The feature set and the support for data types is identical to the desktop version – the major vendors for NMR, LC, MS and IR are all supported. What you get is the same industry leading software package, with the same familiar interface, the same features and powerful plugins and the same ability to interact with data from all your analytical techniques in one place. With Mnova web, you get all this but without the need for installation. Mnova was always unique in supporting a variety of platforms –PC, Mac and Linux. Now a web interface is supported too.

...The feature set and the support for data types is identical to the desktop version – the major vendors for NMR, LC, MS and IR are all supported... 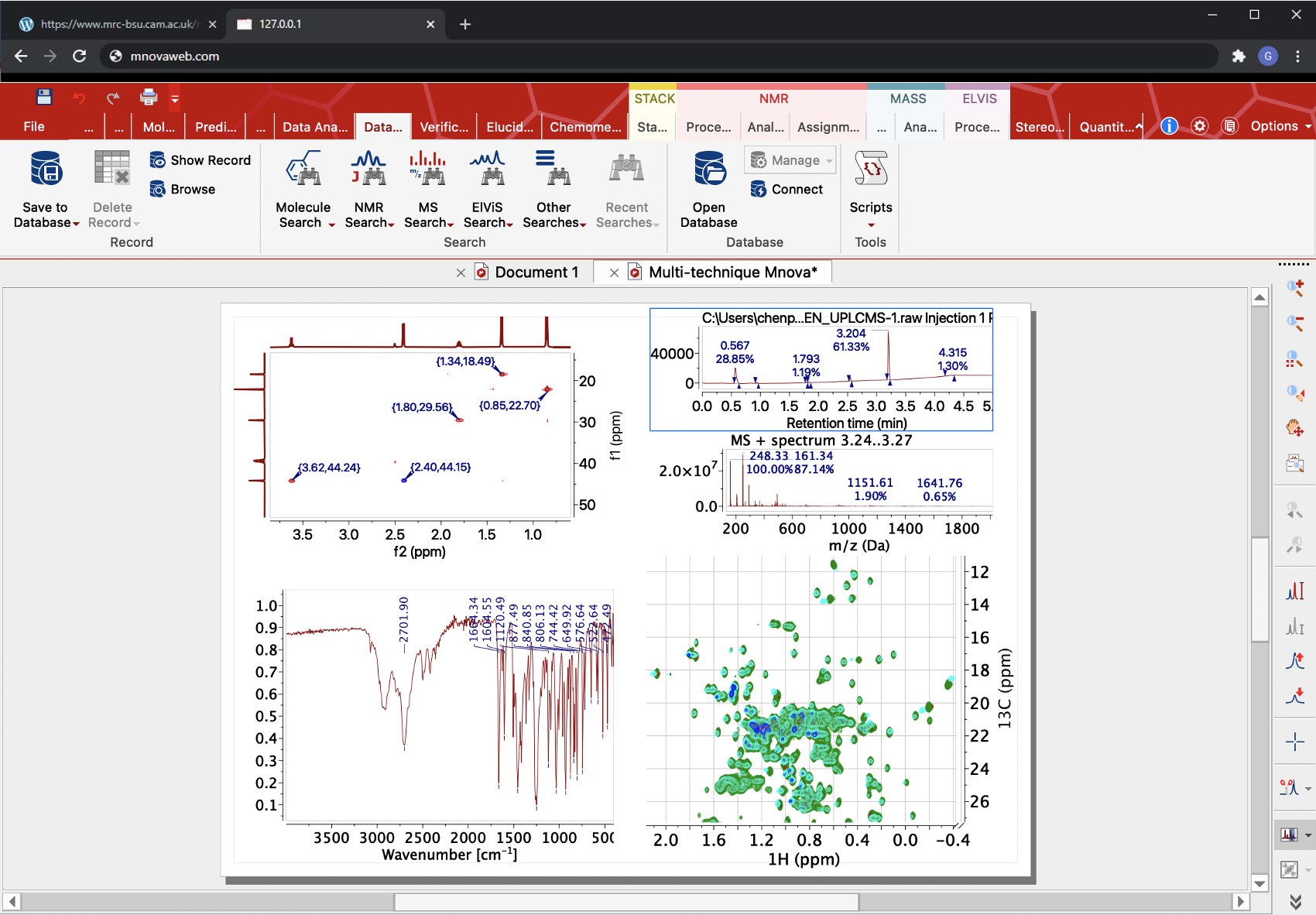 But just being the same as your desktop version may not seem very exciting – why would you want to move to Mnova Web? There are three main reasons. The first is that with Mnova web, it is possible to open data from a link. So with one click from a web site or ELN,* it is possible to open a specific piece of data or pieces of data – no need to navigate to find an NMR or LCMS and open them. The second is that you automatically get the latest and greatest version of Mnova. In an environment where computers are tightly controlled, this means no more frustration that you cannot use the latest killer feature as your IT department have not deployed it yet! The final reason is that you can realise improved performance - files are opened and numbers crunched centrally, so your performance won’t be limited by your local network speed or scarcity of resources on your laptop. No more waiting while that large LCMS file opens when you are working from home.

Of course for IT professionals supporting a scientific group, there is only an upside. No more creating installer packages or rolling up updates to hundreds of users. Instead, central administration of one server that provides Mnova to your users via containers. Such a deployment also opens up the possibility of new licensing models that might allow you to pay for what you are using rather than what you think you might use.

Mnova web might just be that rare thing – a software package that makes both scientist end users and IT professionals happy!

* Your web site or ELN, of course, needs to have the correct links available, but with Mnova enterprise tools this is readily possible.