Resolution is a key concept in high resolution NMR and considerable effort (e.g. shimming) is usually devoted to ensure optimum resolution. High spectral resolution is important for the measurement of NMR parameters, especially for signal intensities, chemical shifts, and coupling constants. However, in many areas of high-resolution NMR the observed resonance lines are broadened in some undesirable way that may complicate, if not preclude, the accurate analysis of e.g. scalar couplings. Moreover, it is possible to directly measure accurate values of J only when the splitting is much larger than the linewidth. The classical solution to the line broadening problem, other than using higher magnetic fields and assuming proper shimming, is multiplication of the FID by a resolution-enhancement function. More sophisticated procedures involve nonlinear data-processing methods such as the much-discussed maximum entropy method. The Filter Diagonalization Method (FDM) and Reference Deconvolution are other well known processing procedures that can be used for resolution enhancement. The most frequently used methods for resolution enhancement are those which involve appropriate mathematical treatment of the FID (weighting). For example, one popular, routinely used weighting function is the Lorentzian/Gaussian transformation. Other well-known weighting functions include the TRAF, convolution difference, and sine-bell functions. Most of these methods have in common that they alter the FID such that its beginning is deemphasized, relative to the latter parts. Although these methods can improve resolution significantly, caution must be taken because information can be destroyed or artefacts created by extreme enhancement, such as that which results in large negative lobes on both sides of a signal. The Resolution Booster is a new frequency domain post processing method which yields a considerable resolution enhancement with a fast calculation, while avoiding the negative artefacts of the other resolution enhancement functions.

In order to illustrate the power of our Resolution Booster method, we will use as an example the spectrum of dimethyl pyridine-2,5-dicarboxylate acquired at 250 MHz: 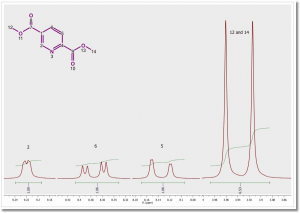 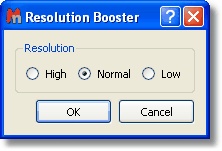 In the picture below you will be able to see the result of applying the Resolution Booster method by using the Normal Resolution: 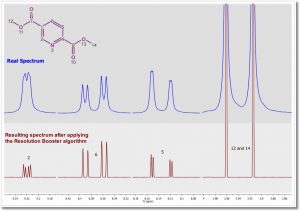 In this case, resolution has been increased by ~230% making possible the calculation of the weak, long range coupling constants.

It is important to notice that this procedure may change relative intensities. On isolated lines, in principle, it is approximately proportional to the second derivative which, when all lines have the same line width (as they often do) is proportional to the line height. However, broad lines can get suppressed and unresolved humps and shoulders get resolved (+) but their intensities and, to some extent, positions can not be trusted (-). It is also possible to apply the Resolution Booster to 2D-NMR spectra (full spectrum or only along f1 or f2):