You are at:Home»Articles & News»qNMR of mixtures: what is the best solution to signal overlap?

If you have been following my recent talks and posters - see SMASH 2014, e.g. - you will know that I have a strong interest in the quantitation of mixture components using NMR. [1,2] The focus here is on "targeted" approaches, where one directly looks for signals relating to each specific compound in the mixture, rather than relying on cheminformatics-based approaches. I am not saying that the latter lacks application!

If the mixture is relatively complex but is made up of sharp lines, then a targeted analysis based on "fingerprint" peaks/multiplets should be the simplest - and possibly the most reliable approach. It is worth remembering that Mnova's Global Spectrum Deconvolution (GSD) is a fast and effective algorithm, and provides an excellent starting point for component quantitation. In the case of overlap the important signals often can be correctly integrated, but some operator intervention may be required to select them. But difficulties will inevitably arise when complexity increases and line overlap becomes a significant issue. There may be uncertainty in what species a multiplet belongs to: for example, this problem is evident in the methyl region of a spectrum of a renal extract where a number of amino-acids appear in the NMR spectrum as nearly identical doublets in a tight range. 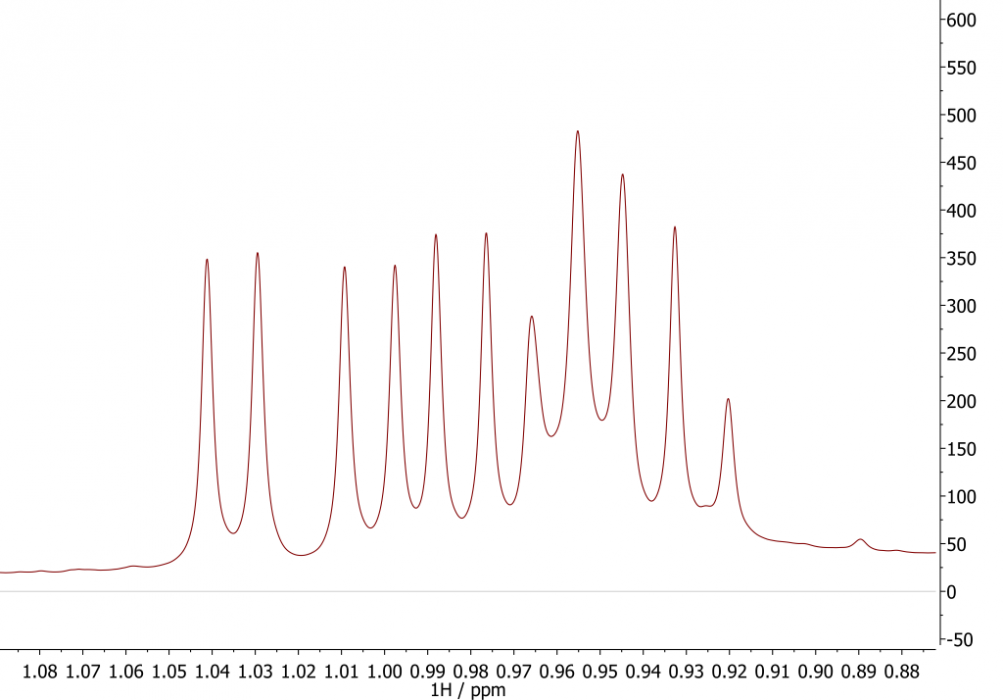 Signal overlap complicates integration and, therefore, quantitation. If the basic method is to be extended to more complex mixtures, how might we solve this problem?

As shown by the Lilly group when they described "fermentanomics" [3], a small number of overlap issues can be resolved by performing a simple 1D TOCSY experiment. The idea is illustrated in the cartoon, below. Let us assume that the species of interest has a well-understood spectrum. Any number of multiplets from the species may overlap heavily with other signals, but if one J-coupled multiplet has only small overlap then it can be used as a target in a 1D TOCSY experiment. Compensation must be made to the integrated intensity of the newly-exposed TOCSY multiplets for the method to be quantitative, but this is a minor complication. In this example, a 1D TOCSY experiment as shown will produce a spectrum where the "green" and "blue" triplets can be seen and integrated, even though they heavily overlap in the conventional 1D 1H NMR spectrum. 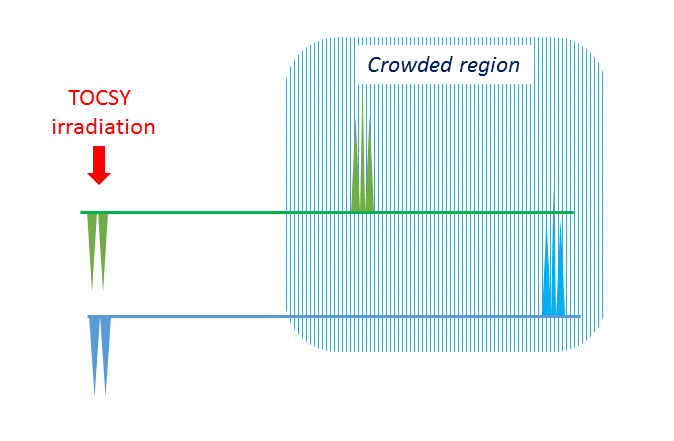 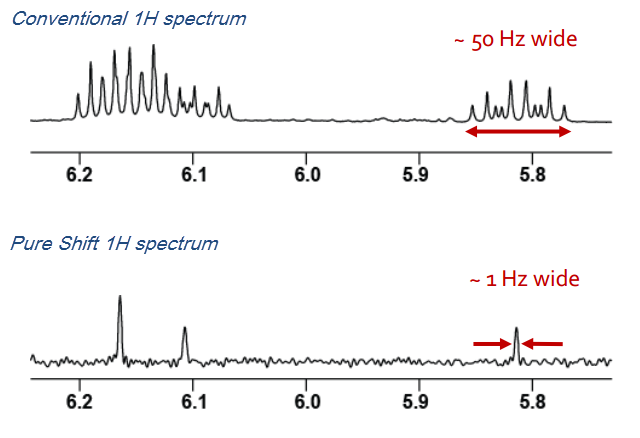 The idea behind these elegant experiments is to produce a perfect, fully decoupled 1H NMR spectrum, where every multiplet appears as a singlet. [4] Ignoring the unfortunate condition of exact overlap, this experiment class must be a very useful contender in the fight to overcome the overlap problem. I blogged on the subject previously, and Dr Juan Aguilar Malavia (Durham University) has kindly provided some exciting spectra that show the promise of Pure Shift experiments in a different context. See here.

The classic way to solve the overlap problem in 1H NMR spectra is to disperse the frequencies in a second dimension: the 2D HSQC experiment has been tremendously popular and useful in this regard. [6] But use of the cross peak integrals in a quantitative sense is complicated by varying transfer deficiencies that are a consequence of variation in 1J(CH), and distortions to the line-shape that result from J(HH) and J(CH).

Here I show the integrated areas of a standard 2D HSQC spectrum of strychnine dissolved in CDCl3. You see that there are significant deviations from ideal cross peak volumes.

A number of experimental approaches to the problem have been described, but these have yet to be adopted at any significant level by the NMR community. QQ-HSQC [7] and 2D HSQCi [8] have been described, and primarily focus on the 1J(CH) problem. Sette and co-workers compared [9] the methods in their quantitative study on plant lignins.

A recent publication from Parella's group describes a "perfect-HSQC", which claims to remove all objections through incorporation of perfect-echo INEPT periods. [10] It will be fascinating to follow this approach as it appears to be very promising. And finally, the COB3-INEPT experiment [11] claims superior J compensation.

We have quite a few options when it comes to extending chemical "fingerprinting" in mixtures analysis using NMR. Which method(s) do the job best will hopefully be answered soon, and lead to a wider adoption of the method.