My first reaction was that this was going to be an easy task, after all these two applications are very different, even though they share the same essence. However, this was actually what complicates this work: There are so many new features and improvements in Mnova compared to MestReC that selecting the most relevant ones is not as easy as I had initially thought. So I decided to write out a list with all those new features that I considered most important and then sort them by relevance and keep only the top 10.

Unlike in MestReC, which does not have molecular structure handling capabilities, Mnova makes it possible the assignment of NMR spectra to their corresponding molecular structure. This can be done either manually, where the chemist can assign the multiplets (1D) or cross peaks (2D) to their corresponding atoms in the molecule, or fully automatically by using a powerful proprietary algorithm (See this article for details: http://dx.doi.org/10.1002/mrc.3995 ). In the figure below, the result of applying this automatic assignment algorithm is depicted. 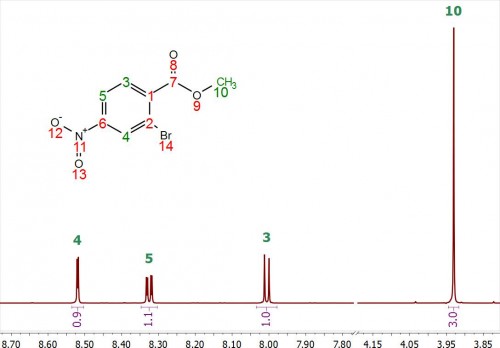 Draw your molecule in Mnova or in any other molecular drawing package (i.e. ChemDraw, IsisDraw, etc and then copy and paste in Mnova) and get a high quality predicted NMR spectrum.  Compare this predicted spectrum with the experimental one (if available) 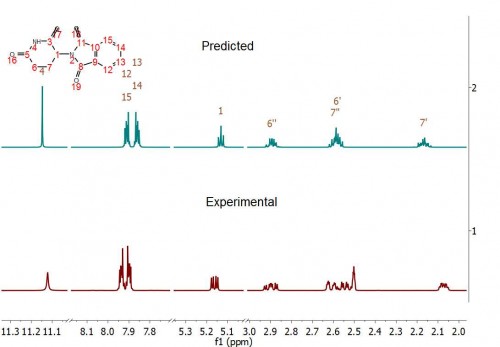 Whilst I had done my outmost with MestReC to process NMR spectra acquired in different instruments as best as possible, over the years we have found that some of the NMR experiments acquired in Bruker instruments were not properly processed unless some advances techniques were employed. On the other hand, Mnova has been continuously improved in order to support not only data coming from all Bruker spectrometers, but also support to Agilent and JEOL instruments was also significantly enhanced. The same applies to other NMR file formats, particularly JCAMP-DX files.

Ability to pinpoint peaks in a spectrum in an efficient way, even in situations of high peaks overlap is probably the most critical step within an NMR data evaluation process. Traditional peak picking methods based on finding the peaks maxima (or minima) show a number of issues, ranging from poor resolution power to inaccurate peaks parameters determination (for example, couplings constants in overlapped multiplets determined in this way are usually underestimated). Mnova includes a very powerful peak picking algorithm, the so-called Global Spectral Deconvolution (GSD) that gives superior results and is the key ingredient of other data analysis methods, like Auto Assignments and Multiplet Analysis. The power of GSD is shown in the figure below where overlapped peaks are resolved. Note also that Mnova includes a peaks classification algorithm which helps to distinguish peaks according to their origin (solvents, compound, artifacts, etc). In this particular example, compound peaks are displayed with blue traces whilst the DMSO peaks are shown in red. 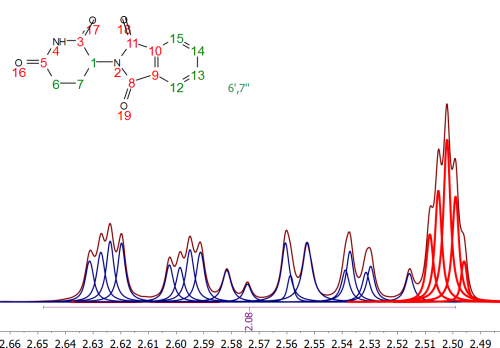 MestReC included the ability to analyze NMR spectra and create multiplets reports that you could easily copy and paste into your papers, thesis, etc. This functionality has been greatly improved in Mnova: It is not only that more complex multiplets can now be handled by Mnova, you can create multiplets reports based on a higher number of standard styles: JACS, Angewandte, J. Med. Chem, J. Nat. Prod., Japanese Patent, Organometallics, Polyhedron, RSC, Tetraedron, etc. And if none of them fulfils your requirements, you can create your own customized multiplet report style.

Furthermore, Mnova offers another unique feature that works exactly in the opposite direction: Given a multiplet report from the literature or from your notebook, you can copy and paste it into Mnova which will automatically synthesize its corresponding NMR spectrum.

Do you need to process myriads of spectra in a consistent and automatic way? Do you have to generate reports with NMR spectra, molecules, include your company logo, etc? Do you need to do any custom processing or analysis? All these requirements are possible in Mnova through its scripting and layout templates capabilities.

MestReC runs only in Windows whilst Mnova does it in all 3 major operating systems, Windows, Linux and Mac OSX. Of course, if you are a Windows User, having the ability to run the software in other platforms would not give you, apparently, any benefit. However, you might have some colleagues in your environment using Linux or Mac OS X. With Mnova, you can share NMR documents and reports with others without worrying about the operating system on the computer of the receiver.

But it is not only that …

MestReC is no longer supported. Last version of Windows in which MestReC was supported was Windows XP. It is possible that it works, to some extent, in Windows  Vista and Windows 7 and 8, but this is not guaranteed and, if any problem is detected, it will not be resolved.

Furthermore, some NMR spectra acquired in latest Bruker instruments might not be properly imported by MestReC whereas Mnova has been greatly improved in that particular area.

9.- Multipage documents: All your NMR data (and more!) in one single document

MestReC introduced for the first time in NMR, a WYSIWYG user interface where you could have multiplet items (e.g. 1D or 2D spectra, pictures, etc) into one single page. Mnova extended this concept further: Each document can contain any number of pages, PowerPoint-like: You can have in one page your 1H spectrum, and in separate pages a COSY, 13C, HSQC, HMBC, etc, with the molecular structure and assignments. 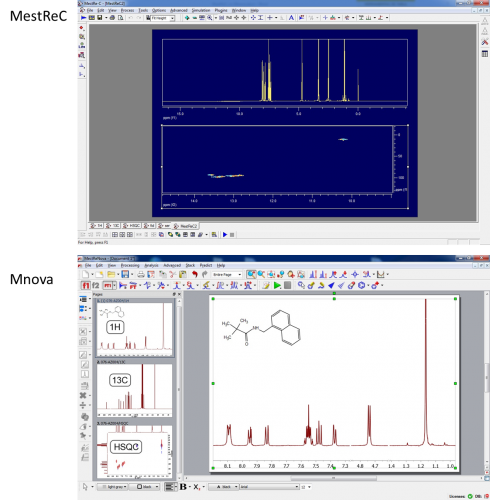 If LC/GC/MS are also analytical techniques of your interest, you can process and analyze them within the same User Interface of Mnova. You can have in one single document both your NMR and LC/GC/MS data.