You are at:Home»Articles & News»What you really need to know about how an Automatic Structure Validation system works

The aim of an ASIC / ASV system (as Mnova Verify) is to evaluate analytical data and to make a judgment as to whether it is compatible with the structure proposed by the user. In this topic, we will not discuss the process of acquisition of the analytical data, where we lack expertise, but will be starting from the point where raw analytical data has been collected by the instrument/s and is therefore available for evaluation / analysis.

This first article on this subject will be high level and not detailed, and a series of articles will follow on the specifics of each step of the workflow or process, for those readers who are interested in more detailed information.

At a high level, there are several principal components or elements which are necessary in an ASV system which aims to confirm the structure of a sample by means of analytical data. Different approaches or strategies can be deployed to fulfill each one of these elements, but these must be there for the system to achieve its purpose. These integral components are:

Integral components of any ASV system

The rest of this article will look, in some more detail, at the approach or strategy followed by Mestrelab Research in the development of our ASV / ASIC system, Mnova Verify. This strategy is illustrated by figure 1. This description is intended as an illustration and example of generic approaches to this problem.

As with any system of this type, the Mestrelab ASV system needs to import, process and analyze raw experimental data, in order to derive from it the information necessary to allow a comparison to theoretical data generated by the system, in order to evaluate the compatibility of the experimental data provided with the theoretical data generated from the structure proposal/s. The wide applicability of any such system will depend on the variety of data types supported, as most users of this kind of system will have situations in which hardware and data systems from different vendors cohabit in the same laboratory.

Our system therefore reads in, and processes:

For an ASV system to work reliably in full automation, it is necessary to optimize all the analytical data processing and analysis steps, typically performed by a chemist when interacting with the data, without any kind of user interaction. Therefore, a set of algorithms need to be developed to carry out fully automatically a set of necessary processing and analysis steps:

For NMR data, and not comprehensively, as this will be discussed in detail in a further article, the software must effectively identify the pulse sequence and experimental conditions and apply the correct window or apodization functions, zero filling and Fourier Transform, phase and baseline correction, advanced peak picking, integration and multiplet analysis (the latter steps often needing of deconvolution). In addition, the software must be able to successfully identify and ignore solvent signals (experimental solvents and synthetic solvents which may remain from previous synthesis steps) and impurities. 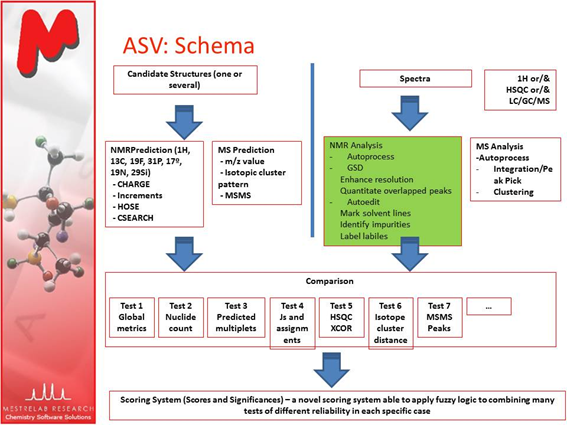 For LCMS or GCMS data, and not comprehensively, the software must be able to effectively identify acquisition parameters such as ionization mode, mass accuracy, etc., and read in the data, peak pick and integrate chromatographic traces (TIC, UV/DAD/PDA, ELSD, CLND, etc.), subtract backgrounds, peak pick and cluster peaks to form isotopes, read in and peak pick MSMS or higher order MS traces, etc.

At this point in the process, a decision must be made as to not only which vendors to support, but also which analytical techniques and experiment types to include in the automated analysis. Whilst there is an argument to use any data type possible, as every experiment, or most experiments, add relevant information, an important consideration in this decision is the viability of experiment acquisition in the context in which an ASV/ASIC system is to deployed, that is to say, in a typically fairly high throughput environment. Therefore, the system must work reliably by using solely routine experiments such as 1H NMR, HSQC and LCMS or GCMS (in most cases, it is not viable to expect users of the system to run additional, time consuming experiments such as HMBC, 13C-13C INADEQUATE, etc.). Ideally, and in order to support as many applications as possible for an ASV/ASIC system at an organization, the system should have the flexibility to work with different combinations of data types. The Mestrelab system, for example, can work with any of 1H, HSQC, LCMS or GCMS, and with any combination of these data types. 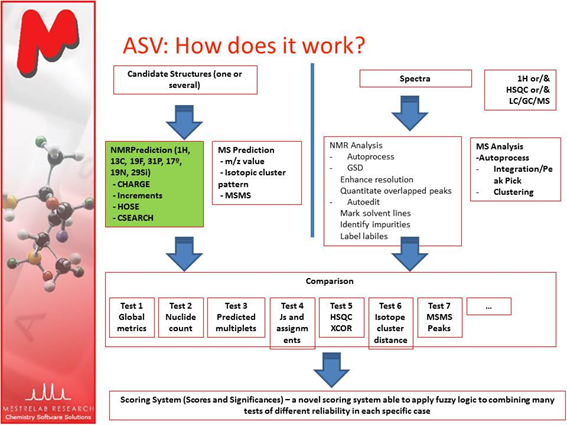 We will devote one or several articles later on in this publication to providing further details about these prediction approaches.

A further important aspect of ASV systems is the potential ability to train the prediction algorithmis underlying the system by adding experimental assignments. This can act as a self-feeding virtuous loop, as the ASV system will direct the analyst or chemist´s attention to potentially poor predictions, as a poor prediction can often result in a failure or a lower score for that verification and, on investigating such failure, the poor prediction can be identified and corrected.

Comparison of experimental with theoretical data

Once we are at the point where we have both theoretical and experimental data, the next step or challenge in an ASV workflow is to compare both, identify the differences and evaluate how important those differences are and whether they mean or do not mean that the structure proposed may be incorrect.

In a pharmaceutical industry setting, we think it makes sense to consider a pass those structures which are not only present in the sample, but which are the main species in the sample. The question we are answering is not ´Is my proposed structure here?´, but rather, ´Does my major species in this sample correspond to my proposed structure?´. This has implications on how the analysis is performed. 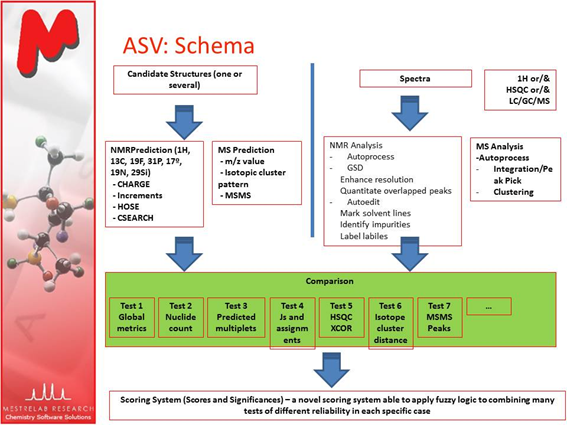 Comparing theoretical with experimental data is a fascinating subject, which can be approached in many different ways. Any successful comparison in the realm of analytical chemistry should, however, have some basic characteristics:

At Mestrelab, we have developed a novel scoring system to handle these challenges, which could be considered to be inspired in jury dynamics or game theory. This will be described in more detail on a later article in this publication. 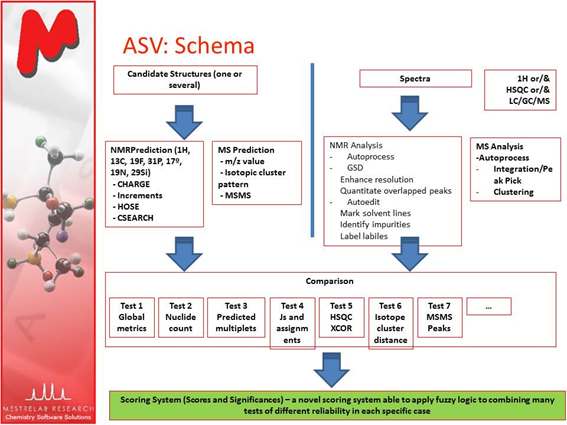 A final and very important step in an ASV system is the presentation of results. This must be flexible, as different users may have different needs when using ASV systems. An user may run a batch verification with a large library and have a need to get a bird´s eye view of thousands of results, whilst another user may have run one single verification and be interested in the detail which lead to the pass or the fail. For this purpose, and to ensure flexibility, the software package must be able to output results in multiple different formats, both for single and multiple analysis. 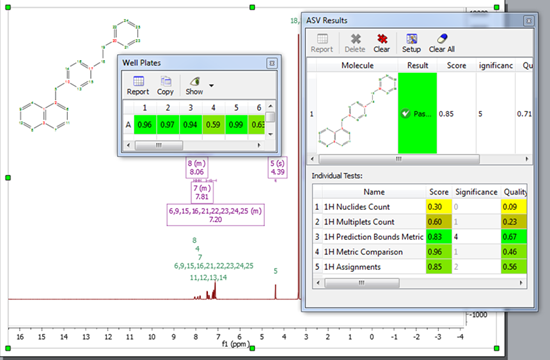 In all cases, it is also important to afford the scientist access to the analysis parameters and to allow reprocessing, re-analysis and re-verification of the data, to avoid full reliance on the fully automated verification system.

Forthcoming articles in this section will focus on different steps of the ASV process, as implemented into our system and our Mnova software. We will also aim to cover different applications and contexts in which ASV / ASIC may be used, discuss the data quality requirements for such a system, etc.