1H NMR is for sure the most powerful technique for structure elucidation, especially for small organic molecules. Typically, an organic chemist uses the chemical shift, coupling constants and integration information contained in an 1H-NMR spectrum to either verify or elucidate an unknown compound. Of course, it’s quite common that a simple 1H-NMR spectrum is not enough to unambiguously confirm a structure and thus other NMR experiments (e.g. 13C-NMR, HSQC, COSY, etc) are used to get more structural information. Nevertheless, we have often found that many organic chemists do not always try to get the most out of 1H-NMR spectra (which is the cheapest experiment), in particular when some multiplets are complex to interpret (due to the strong coupling) or when peaks overlap prevents valuable information to be detected in some multiplets. As it is well known, there are two principal factors limiting the resolution power in a spectrum. First, we have the natural line width limitation imposed by the T2 (spin-spin relaxation). For example, if T2 is about 1 second, the peak linewidth at half height cannot be less than 0.32 Hz (remember, line width at half height = 1 / (pi * T2) = 1 / 3.1415 = 0.32) no matter how powerful is our NMR instrument or the field homogeneity. On the other hand, there are instrumental shortcomings (e.g. spatial uniformity of the applied magnetic field, etc). Nonetheless, there is an additional limiting factor, and whose importance is generally underestimated which has to do with the generally large number of transitions in 1H-NMR spectra. In short, the peaks we can observe in a 1H-NMR are just a small fraction of the actual transition resonances which are not observable because of the limited digital resolution. In fact, every peak in an 1H-NMR spectrum is basically an envelope of a large number of transitions and its shape is dominated by the coupling pattern of the spin system. Even in molecules of modest size the number of distinct peaks is tens to thousands times smaller than that of quantum transitions. These problems have been the motivation of the development of a brand new peak analysis algorithm, the so-called GSD (Global Spectral Deconvolution); which applies automatically a deconvolution of the whole spectrum in a few seconds and does not require that the user set a starting point for the fitting of each multiplet. Let´s see the GSD in action. Just open a 1H-NMR spectrum: 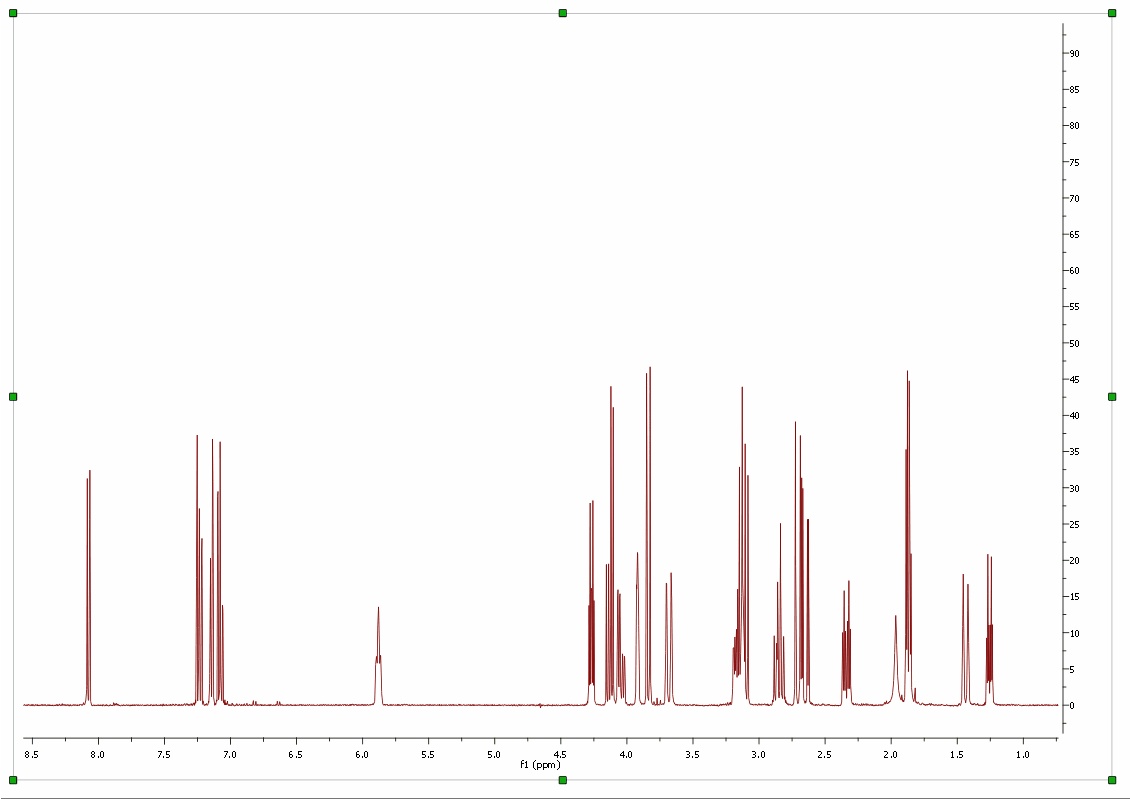 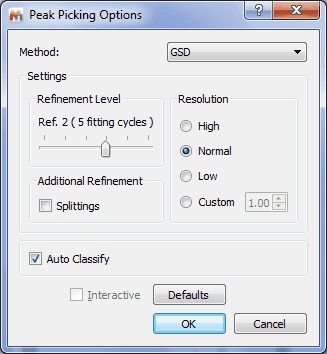 Automatic multiplet deconvolution will be applied to the whole spectrum without asking the user to select multiplets, specify number of lines and their approximate locations, etc … Everything is automatic! ((However, if your dataset has less than 64K points; we recommend to apply a 'Zero Filling' (until 64K) before the GSD to get better results).) 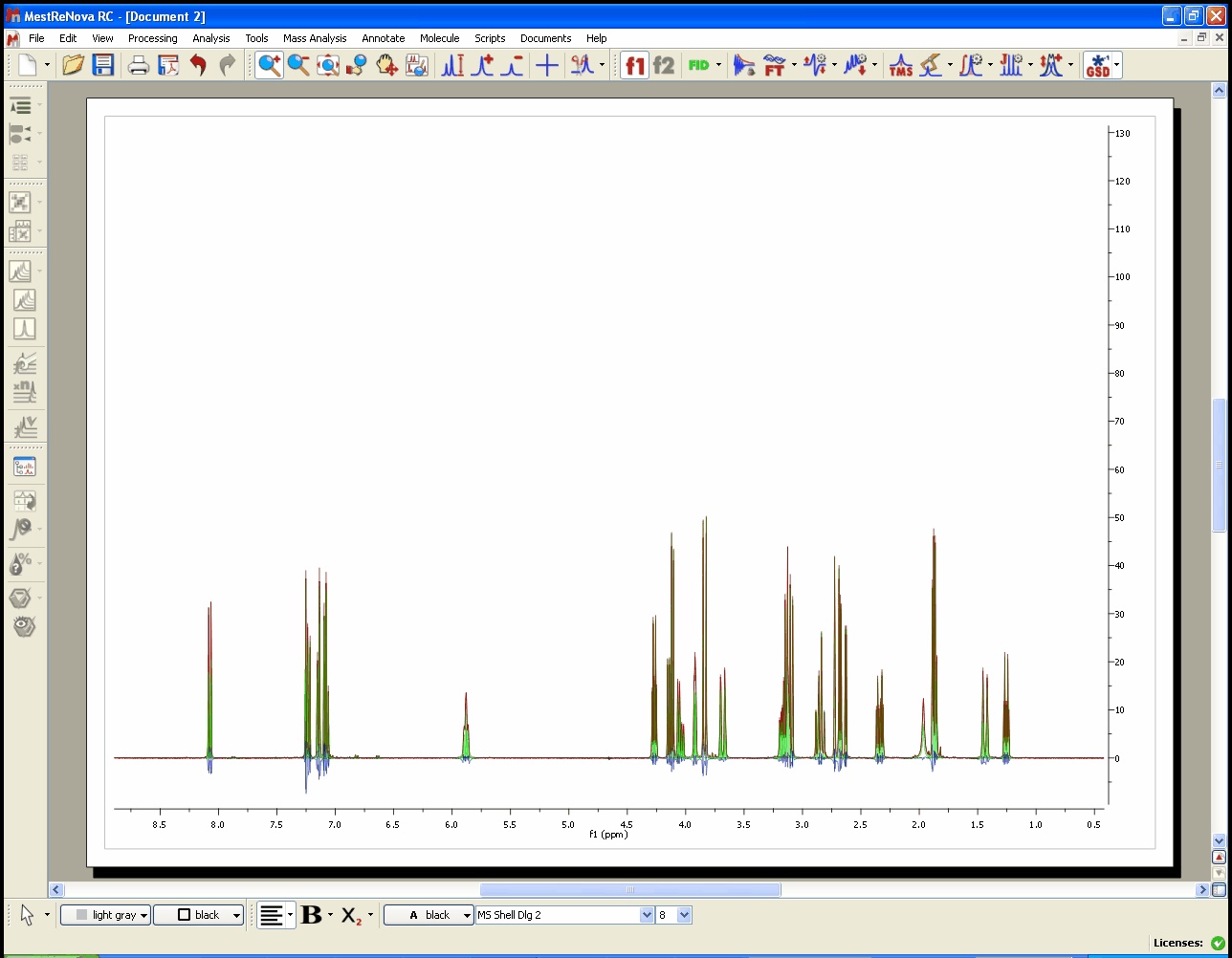 Let´s expand an area to see how the algorithm works: 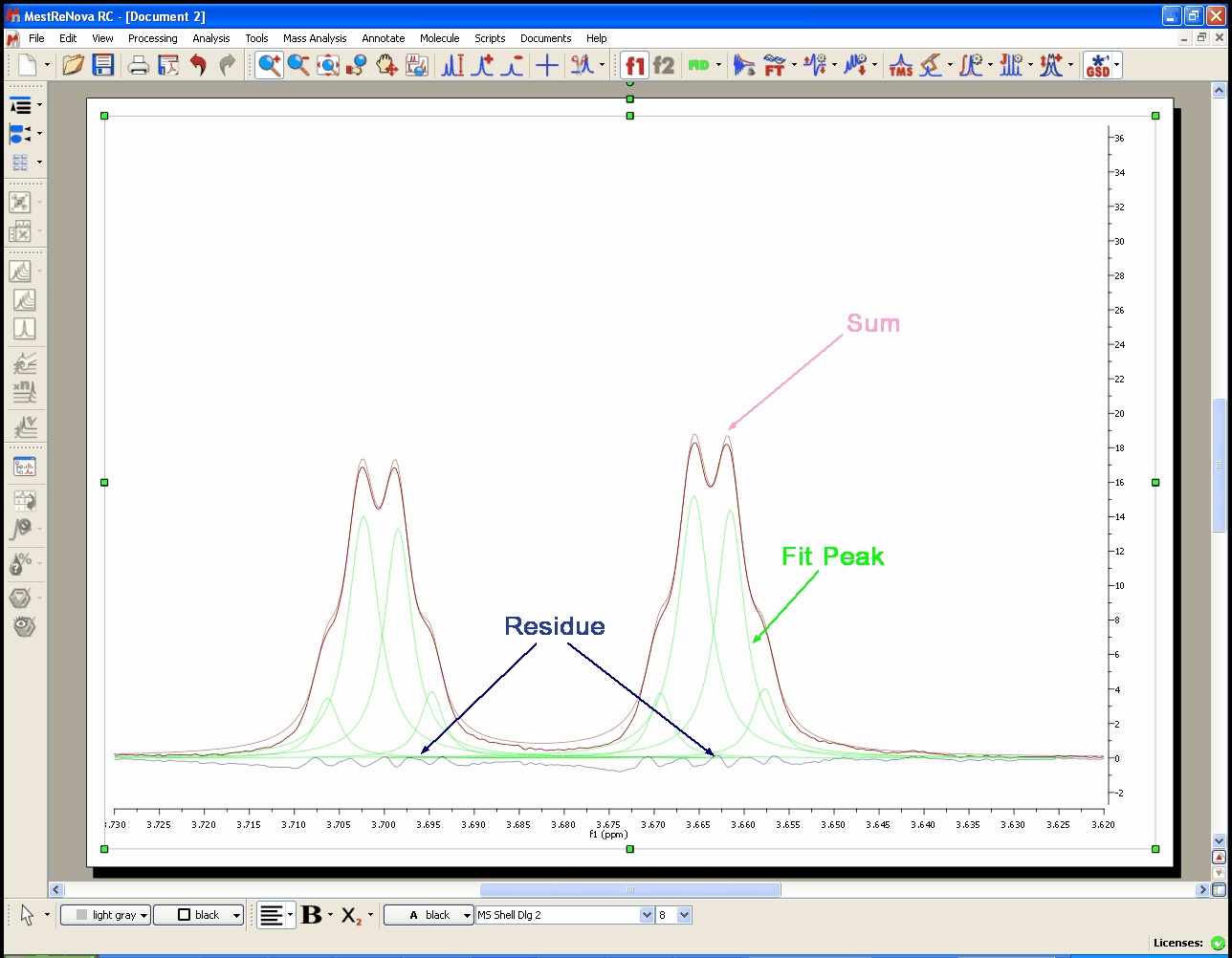 As you can see in the picture above you will obtain a green line to show the fit peaks, a blue line to show the residue and red line to show the sum. It’s very important to realize that the result of GSD is just a list of peaks, but each peak is fully characterized (chemical shift, Peak Width, Height, Phase, Area, etc). It is possible to see the list of the GSD peaks just by following the menu 'View/Tables/Peaks' (or by right clicking on any toolbar and selecting 'Peaks'): 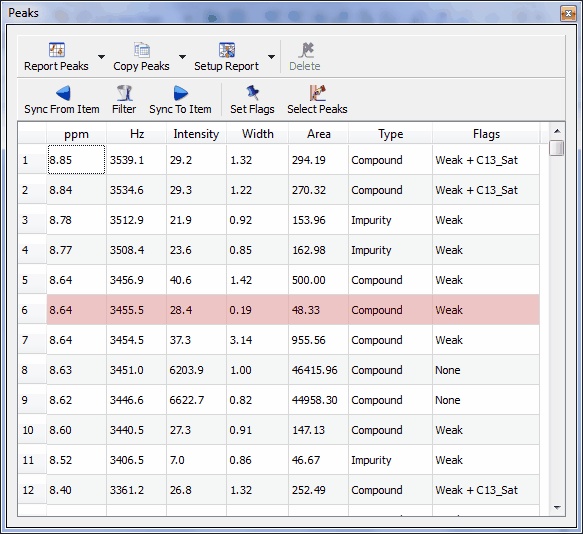 This table contains information about the chemical shift, width, height, Area, Type and Flags. It is possible to manually edit the 'Type' and the 'Flags' table just by double click on the corresponding cell. 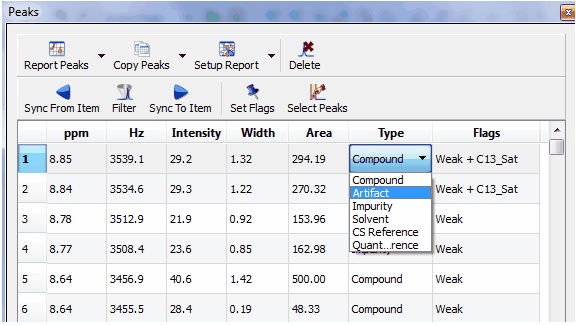 You can also select several cells and click on the 'Set Flags' button to change the Type or the Flags of several peaks at the same time:

Once you have edited your GSD spectrum, you can generate a new spectrum with the fit peaks, just by selecting 'New Spectrum' in the 'Peak Picking' scroll down menu: 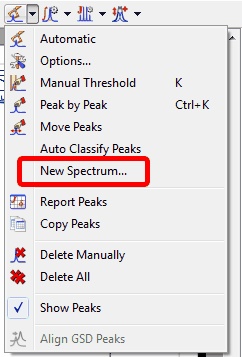 This will display a dialog box from where you will be able to select the mode of the new spectrum (Synthetic, Sticks, Uniform Line Width or Proportional Line Width). From here you can also excludes the peaks with a specific 'Type or Flag' and you can get the spectrum a new item or stacked with the original one. We will generate a new spectrum with a proportional Line Width of 0.3, including only the peaks marked as compound (without artifacts, solvents, impurities, etc.) 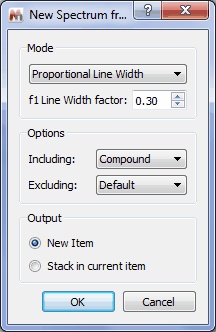 Here is the result of the New spectrum from GSD: 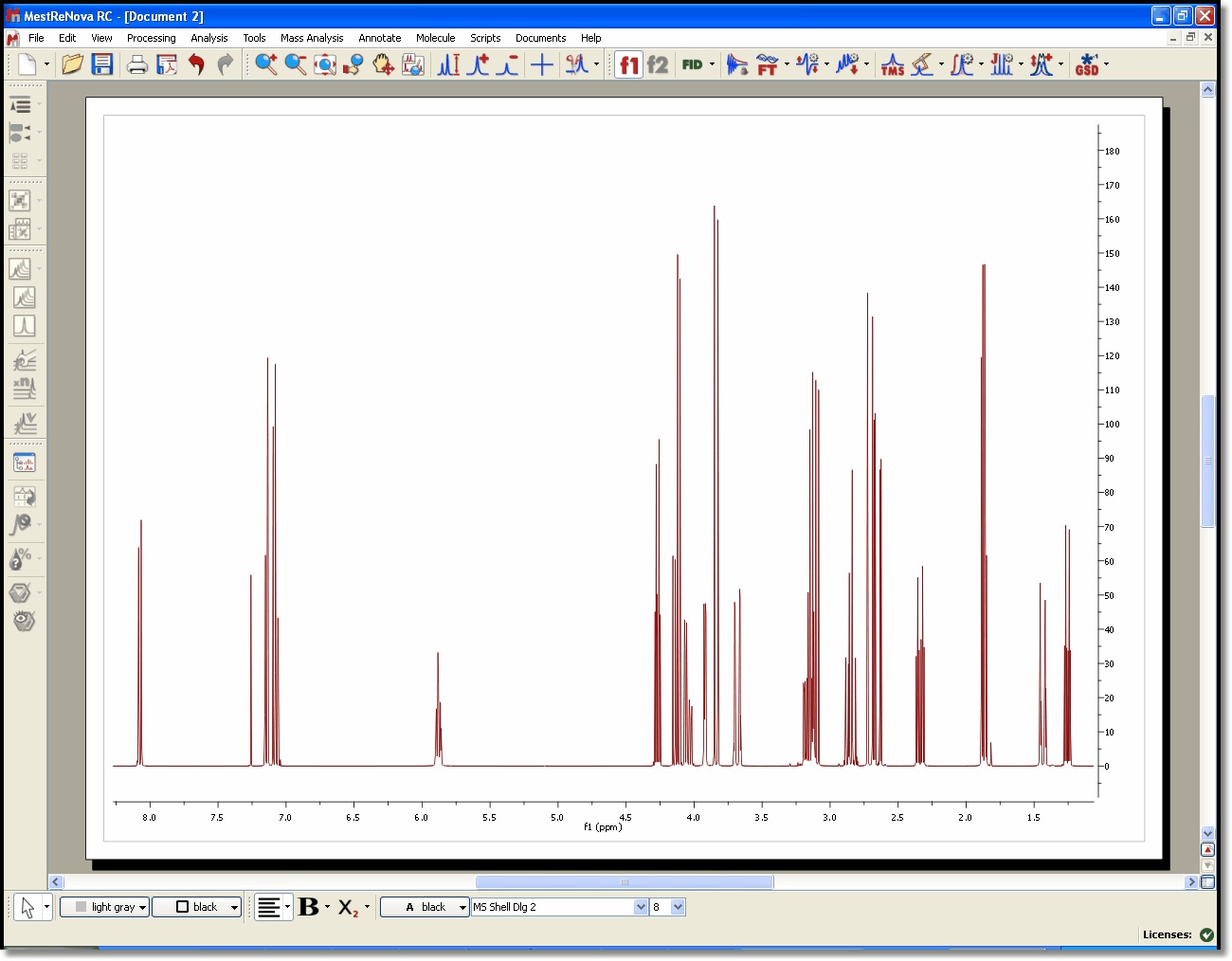 You will see in the picture below an expanded region of the original spectrum and the GSD one in stacked one. As you can see, now it is possible to measure any coupling constant in the spectrum, as all the multiplets has been resolved: 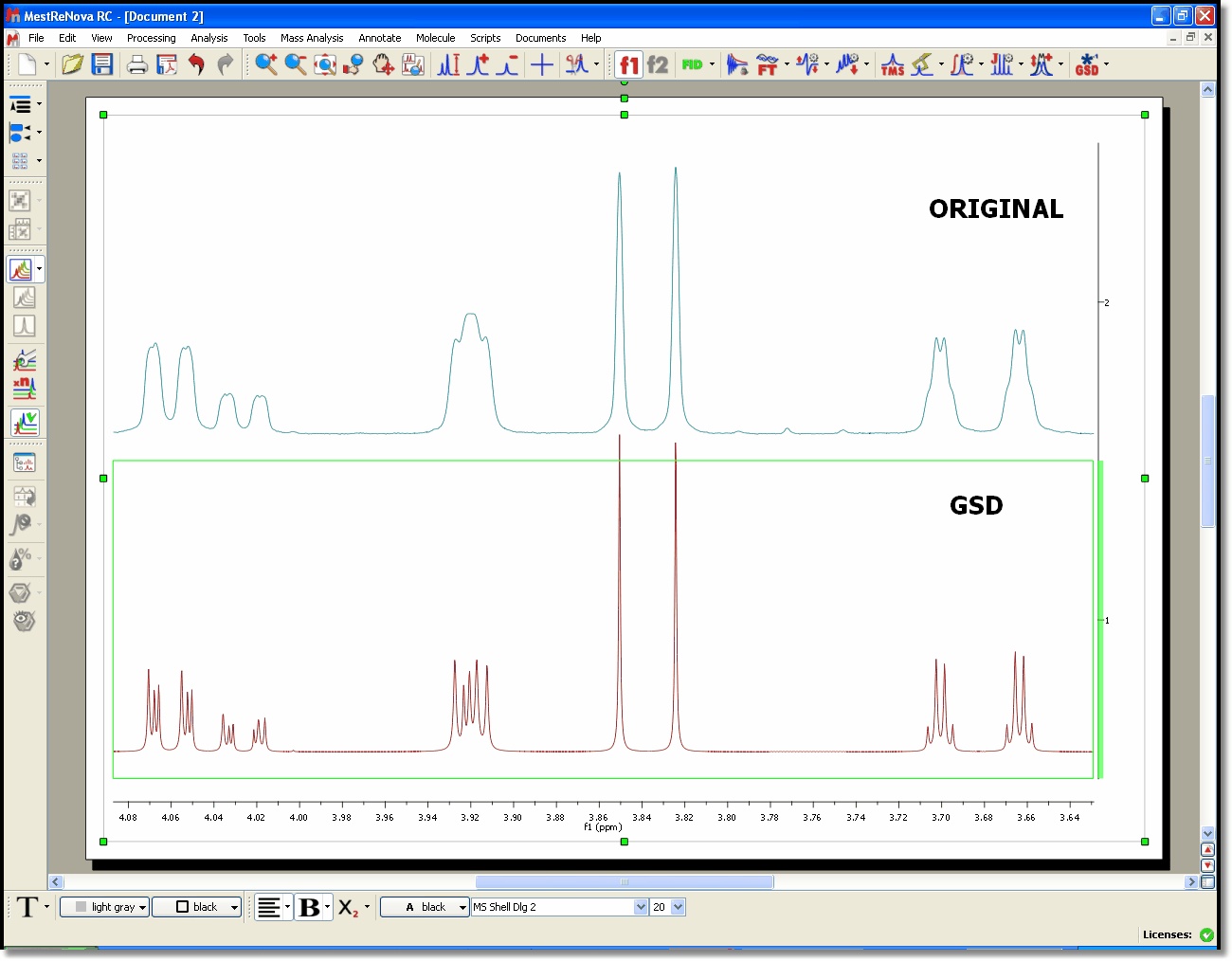 What else can I do with GSD?

As you have seen above, from the GSD list of peaks, you could create a mocked spectrum with enhanced resolution; but in addition you can use GSD for example to remove solvent lines. Consider the following spectrum containing solvent peaks (DMSO/Water): 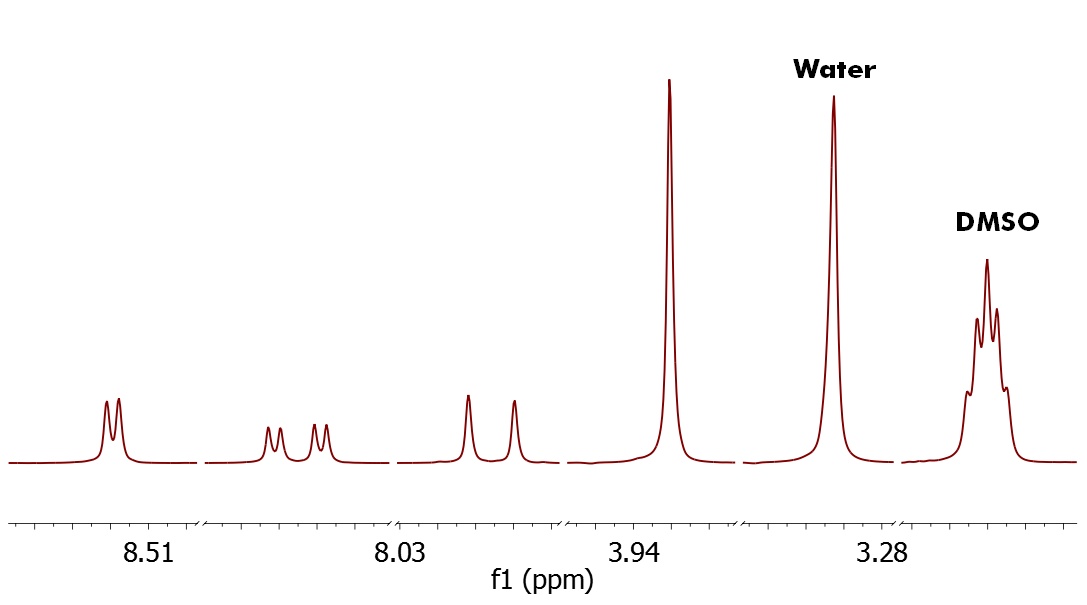 To remove the undesired peaks, just run GSD and then from the table of GSD peaks, we flag the solvent peaks (in yellow in the figure below): 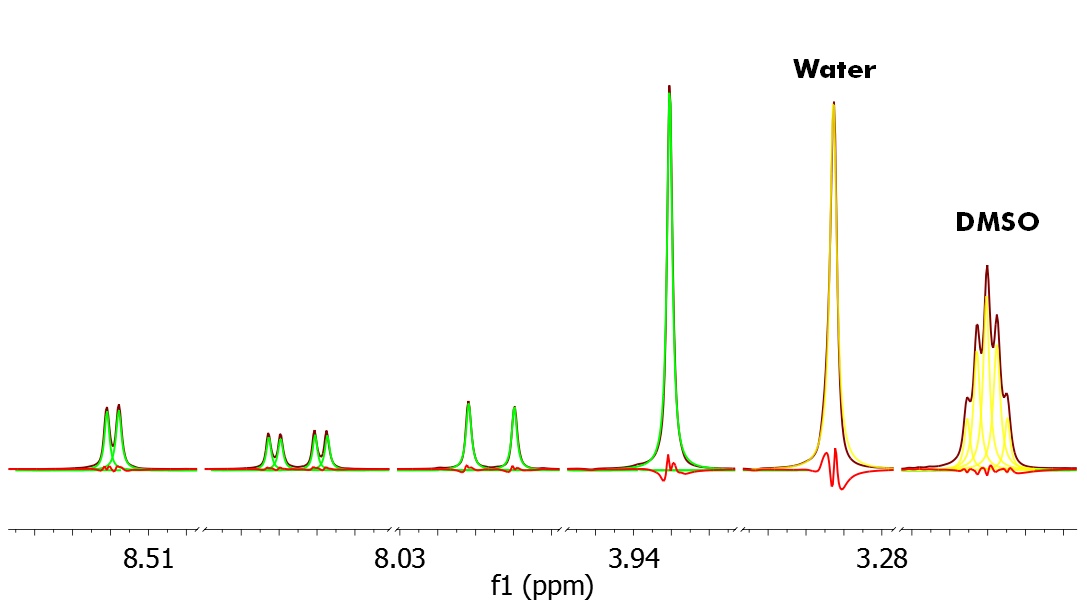 And finally we create a new synthetic spectrum without the solvent lines: 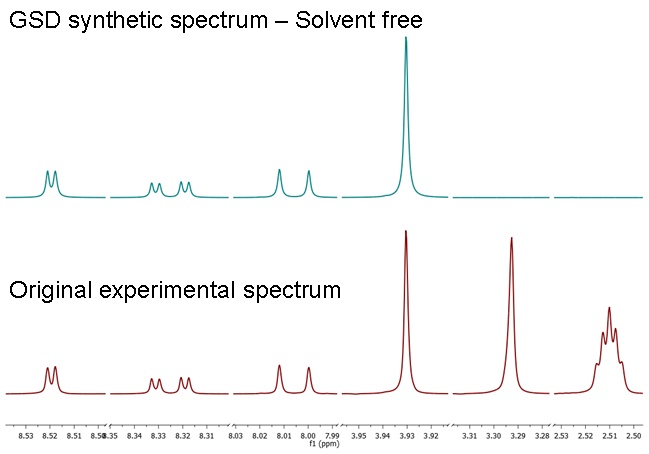