qNMR is a common theme in my blogs, and it is always interesting and fun to speak with the growing number of like-minded colleagues. Dr John Gauvin (DSM, Holland) recently gave an excellent webinar presentation where he compared the errors and accuracy that can be expected when either “sum” or “peaks” (GSD) integration is used. [1] For conventional spectral analysis GSD peak picking and integration has a lot to offer, but for the very best results that qNMR usually demands “sum” integration is king. [2]

There are occasions where a conventional “sum” integration is spoiled by the unfortunately placed impurity peaks in the region that we would like to accurately integrate. We worked with Torsten Schönberger of the German Bundeskriminalamt (BKA) on this problem, and came up with a new integration mode that we call “edited sum” (ES). This is described in detail. [3] I wish to introduce you here to this novel solution to a common, practical problem in qNMR analysis. I will show two examples where it might be applied, and how to actually do this in Mnova.

GSD is a major capability in Mnova. In the context of qNMR and this discussion we need to remember:

Peak type classification is an automatic procedure with GSD. Mnova attempts to categorise peaks (approximately) and specify that they are related to:

The sum integral for a region should be very close to the summed areas of all peaks in that region, regardless of their classification.

We show, below, the 1H NMR spectrum of estradiol dissolved in DMSO-d6. GSD peak picking was applied using the default settings: average peaks, 2 fitting cycles. The acquired spectrum is shown as a black line, the GSD peaks are blue, the sum of these peaks is red, and the residual is green. 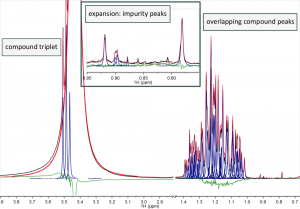 We take note of these high-performance features:

The basis for ES is that it is a hybrid approach that uses the best features of Sum and GSD peak integration to assist with tricky integration tasks relating to quantitation.

Mnova will then sum the GSD areas of these impurity peaks, and remove their contribution from the Sum integral by applying a scaling factor. [3]

In the most demanding cases of qNMR uncertainty levels <0.1% are required. [4] Considering only the signal integration aspect, wide integral limits must be chosen so that the full integral of the peak is determined by Sum integration. This wide integration region increases the likelihood that peaks from impurities and 13C satellites will resonate in the measurement region and adversely affect the measure.

We see in the spectrum, below, a portion of a spectrum. A contaminating triplet signal is seen close to the high-field 13C satellite of the doublet.

When we determine the absolute integral by “Sum” integration (LHS) the value is actually inflated by the area of the contaminating triplet. When we mark the triplet peaks to be non-compound, and use “Edited Sum” integration we see the result on the RHS.

The integral obtained by using ES integration is equivalent to a “Sum” integral of wide region, but without the contribution from the contaminating triplet peaks. 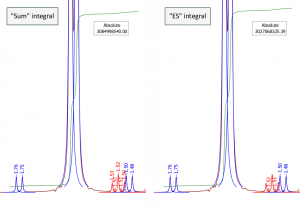 Consider a spectrum for quantitation at a more typical uncertainty levels of ca 2%. [5] In the spectrum, below, you see a compound doublet at lower field that is overlapping with an impurity doublet. We would like to quantify the main component.

Whilst one solution would be to use GSD-derived integrals for the compound peaks, we would prefer to keep using Sum integral for quantitation. The solution lies with ES: the high-field peaks are set to have their type to be “Weak peaks”, and ES automatically removes their integration contribution from the Sum integration for the region. We see that the Absolute integral for this region is adjusted down. 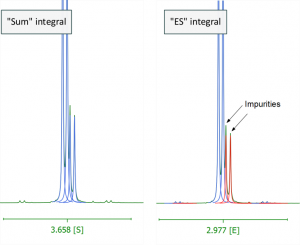 To test the operation of ES, I used a 1H spectrum of ibuprofen acquired under quantitative conditions. The spectrum shows two, high-field methyl doublets having a theoretical integral ratio of 6:3. Using conventional, Sum integration I measured a ratio of 6.003:2.000 from the spectrum.

Next, a spectrum having doublets in an integral ratio of 2:1 was simulated. The simulation placed the peaks close to the ibuprofen doublets, and the spectra were added using the Mnova “Arithmetic” tool. These are shown in the figure, below.

On the LHS we can see the result of a conventional Sum integration of these 2 regions. From the absolute integrals we see a relative ratio of 5.730:3.000 – clearly very wrong!

On the RHS I used Edited Sum. The peak “type” of the simulated spectra were changed to be of type “Weak”. To do this, hover the mouse on the peak, and right-click. Then select “Edit peak type”, and change the Peak flags to “weak”.

Lastly, Integral -> Options… were used to (a) change the “Calculation method” to “Edited Sum”, and the “Exclude” list to include Weak peaks. 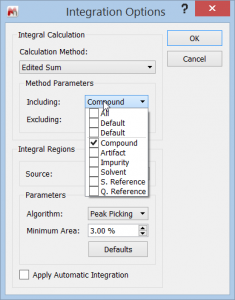 The same integral regions were used, and the ratio of integrals changed to the correct value of 3.000:5.986. Differing by 0.28% this result is agreeably close to the numbers obtained for the starting spectrum. 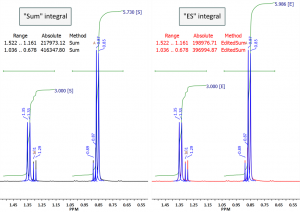 Mnova is a powerful processing capability for quantitative NMR. This has been extended to deal with “real world” overlap problems with the Edited Sum integration method.